Producer Challenge Filtrs happens in response of Radio NABA celebrating 19 years of broadcasting. The competition is organised by the techno music broadcast KINETICS and Radio Naba in collaboration with Erica Synths. The aim of the competition is to motivate & showcase upcoming talent and artists as well as to promote Latvian electronic music specifically with focus on independent and underground music.

Radio NABA is non-commercial music radio station in Latvia that can be heard at 95.8 FM, and features over 40 shows. The rest of the world can currently tune in online. NABA came into existence with the support of the University of Latvia and The Latvian National Radio and became 6th Latvian Radio channel.

Peter Kirn fuels his love of techno and dancefloors with a deep background in experimental music and machines. He's released his own music on Detroit Underground, Snork Enterprises, Instruments of Discipline, and his imprint Establishment, as well as engaging collaborations from architecture and spatial sound to modern dance. As an organizer of open collaborative performance labs, he's worked with CTM, MUTEK.mx, STUK, and Nusasonic/WSK festivals. He writes and speaks about music making and creative technologies, including running the daily site CDM and co-producing the MeeBlip synthesizer hardware line.

Nene H is one of the most exciting underground DJ’s in Europe. Based between Berlin and Copenhagen, she has a highly refined taste in techno and her style is best described as groovy and highly energetic. She is highly skilled with her analog gear and bold live sets, with her openness to other genres, courage for experimenting, taking risks and surprising the audience through her artistic projects while keeping the focus on always techno first. Coming from a classical music background she uses her theoretic skills and musical knowledge in her experimental projects, where she has played boundary pushing live sets at the likes of CTM Festival and Berlin Atonal.

Dr Nicolas Bougaïeff is an artist based in Berlin. His latest album The Upward Spiral has been described as “a fresh, fearless perspective on techno”. A decades-long love of club music has compelled Bougaïeff to challenge conventional wisdom, delivering genre-busting Berghain sets that expertly blend hip-hop with avant-garde classical, moody techno and ambient. Launching his debut record as a producer in 2013, the Movements EP with Max Cooper, Bougaïeff has since put out a string of singles on labels including his first EP on novamute in 2017, Cognitive Resonance. Bougaïeff has collaborated on a number of multi-disciplinary projects in fashion and live audio-visual performance. Bougaïeff is a Senior Researcher at the University of Huddersfield and is a recipient of a Marie Skłodowska-Curie Research Fellowship on techno production. From his teaching - he founded the Berlin Academy of Electronic Music - to writing his PhD thesis on minimal techno, Bougaïeff goes the extra mile with every project.

Eliza Aboltina is a Latvian organiser of electronic and experimental music projects including Live Electronic Music Festival KONTAKTOR, experimental music festival Skaņu Mežs and Erica Synths Garage among others. She has been actively working on expanding and promoting the electronic music scene in Latvia since 2016 as an event organiser, journalist and project manager.

Techno and experimental music DJ and producer from Riga, Latvia, active since 1997. Since 2001 owner of 808.lv - a platform for the Latvian underground electronic music.

NGC-5128 is not just a galaxy in the constellation Centaurus A, but also an alias of Kristaps Lagzdins – an experienced electronic music producer, DJ and urban dreamer from Latvia. He has been known as a persistent and adventurous explorer of the techno soul for years. NGC-5128’s music is futuristic, synthetic, yet melodic, owing much to Detroit’s techno and tech-funk of the 90’s.

Latvian DJ , promoter and radio host since the 90'ties with focus on eletronic music. Currently playing minimal, deep and Detroit-ish techno and tech-house combining digital and analog sound from vinyl and ableton live. 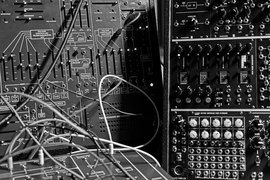